Kitchen knives are very easy to sharpen, which is fortunate because most of them are left rattling around in drawers or abused in a variety of ways that dulls them very quickly. However, most kitchen-knife users seem to be satisfied with the condition of the knife as long as the cutting edge is keener than the back of the knife. The tolerance for dull knives is amazingly high in most kitchens.

The practical test of sharpness for a kitchen knife is whether or not it will slice soft vegetables, meat or bread. In all three uses, you do not want a knife with a classically sharp edge; you want a slightly serrated edge, a sort of combination between a knife and a saw.

USING STONES
Using stones to sharpen is not fast but kinder to fine knives. Unless a knife needs major reshaping, a water stone in the 800x to 1200x range is fine. Such a stone will remove metal at a good rate and still leave just a nice amount of tooth in the edge.

Wooden-based water stones are particularly suitable for knife sharpening. There is a 1000x stone in a 0.5-in. x 2.5-in. x 7-in. size that is just right. It is easy to hold safely, is inexpensive and handles the full range of kitchen knives.

For slicing knives of all kinds, you can use quite low bevel angles for basic edge shape. Bevel angles of 5° (10° included angle) would be about right. Very seldom would the included angle be more than 20°. It is a simple matter to create bevels at 5° and restore them after dulling. Using the 1-in-60 rule, you would raise the back of a 1.5-in. wide knife just 0.125-in. off the stone and take slicing cuts on the stone, first in one direction, then the other.

But you don’t have to be particularly fussy about these angles. A slicing knife will work well with a 20° included angle, and if you find it easier to sharpen at that angle, do so. Just choose a motion that is comfortable to you and that you can repeat with reasonable certainty. If you imagine that you are trying to peel a layer off the stone with the knife, you should arrive at a consistent sharpening action. If you need a guide for knife sharpening, our 196N Sharpening Angle Guide Set with 14°, 17°, 20° and 25° angles could be a wise choice.

USING HONING RODS
Many people use ceramic rods for touching up knife blades between sharpenings. These honing rods are set at quite obtuse angles. The one shown in the photo at top left has rods set at 22.5° to the vertical, which, if one follows the instructions for use, would give an included sharpening angle of 45°. This is a fairly blunt angle; while it would be suitable for something like a butcher knife, it would be too obtuse for a slicing knife.

However, it is not necessary to follow the instructions with these rods, which say to hold the knife vertically and draw it against one rod and then the other. Using the ever-handy 1-in-60 rule, you could hone at slightly more than 10° and still find that you were able to restore an edge fairly rapidly. Honing at 22.5° as most instructions recommend would lead to fairly rapid thickening of the blade, as shown in the drawing above. This will cause no problems if you are prepared to restore ideal edge geometry on a belt sander regularly. 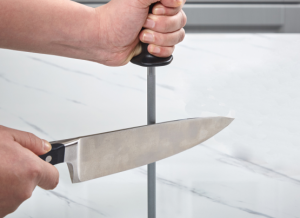 USING KNIFE STEELS
A knife steel is a very hard steel rod that has a series of fine longitudinal serrations. When a knife is drawn against the rod, the blade touches only the tips of the serrations; the substantial point pressure actually deforms the steel in the blade, smoothing it and displacing it marginally. It is used to create an edge by reforming the steel adjacent to the edge.

The basic problem with knife steels is that they are of hugely varying quality, which is not always reflected in the price. Another problem is that most people use them incorrectly. There is not much you can do about the quality of the steel, other than take the advice of a reputable dealer. Regarding use, we strongly recommend that you adapt the stance shown in the photo above, where you hold the steel in position and draw the knife down and across the steel as if you were going to remove a shaving. The great chefs do freehand steeling of knives with a marvelous show of dexterity. If you are a great chef and have mastered this modified form of swordplay, we commend you. For the fainter of heart who would rather only slit their wrists intentionally, I recommend the illustrated process. It will give far more consistent results. One final point: Never use a knife steel on a laminated blade with a high-carbon core. It will chip the knife.